The FSOE Parallels extension continues its incredible line of releases, this time with a number from the artist David Broaders. Brimming with promise and endless creativity, David Broaders has established himself as a force to be reckoned with by making the rounds on labels such as Blackhole Recordings, Enhanced Music, and Silk Music. With his in-depth craftsmanship and true progressive aesthetic, Broaders’ productions never fail to deliver on breathtaking moments of self-reflection. “Neogenesis” is a true validation of this, proving to be more of a journey than a forced feeling.

The track has an impressive vocal arrangement accompanied with strong piano keys, almost reflective of Above & Beyond’s older productions during the ‘Tri-State’ era. The climax acts as a transport hub to an ethereal state of mind. The graceful vocal samples of an unnamed muse that ring out through the track are nothing short of magnificent. When listening to the track as a whole, nothing seems out of place. The background pads are uplifting, the lead synths are delicate, yet powerful, and even the drum fills appear to successfully seep in and out of the mix perfectly tuned.

In an exclusive statement to Beatcue, David Broaders explains the thought process that went behind the track that would inevitably become “Neogenesis”:

I started the track in 2013 but never got around to putting the final touches on it. I came across the project again during the summer and thought it was time I finished it. Around that time I was listening to Anjunabeats Vol.1 and that definitely inspired some of the sound choices in the track. The lead, acids and bass in particular. I like to combine both old and new production techniques in my tracks and I think ‘Neogenesis’ is a good example of this.

A stunning release in its own right, any progressive fan or DJ should give it a listen. Nostalgia meets modernism in an elegant matrimony that works flawlessly. “Neogenesis” brings a nuance to the trance that has been released as of late. Whether it be psy, tech, uplifting, or epic, nothing has been able to capture this particular feeling of benediction in some time. Despite a long time in the making, “Neogenesis” manages to fit itself seamlessly in today’s selection without conforming to any expected trends. 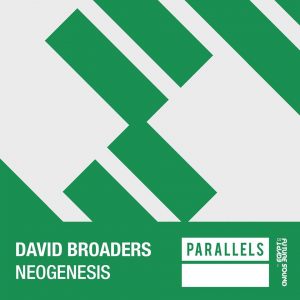 “Neogenesis” is out now on Beatport via FSOE Parallels. The track is also seeing releases in other platforms on February 2nd. Purchase a copy if you would like to hear it for yourself! To stay up to date on David Broaders’ latest happenings, give the links below a visit.