On Friday, April 25th, well technically it was midnight on Saturday, Providence, Rhode Island hosted two of heavy bass house music’s finest acts at Club Therapy. The third stop of their most recent tour, Beatbox Tour, in support of the recent “Beatbox EP” release on OWSLA, the guys from Jack Beats brought along AC Slater, the King of Heavy Bass House in America, for a night guaranteed to be filled with wobbling bass and house beats for its entirety. This was my first time attending the new Club Therapy. I never went to the old one either, but I heard nightmare stories about it being a very shady and sketchy place. So my expectations for the new Therapy were not very high. I was expecting another dingy nightclub, but I was proven wrong. After entering with relative ease, as compared to many other night clubs, I was completely blown away with the production value of the night. The sound system was on point, the visuals were amazing (as you can see from the pictures), the security was kind and polite, and the music played until 6 in the morning.

Now onto the music. I could not have asked for better openers. Spinning songs that got the crowd moving, but leaving them with enough energy to party all night. Towards the end of the openers set, I unfortunately never got his name, he started to pick up the pace playing songs with more and more energy leading me to believe that the first star of the night, AC Slater, would be on. Along with the higher energy beats, the visuals started getting more and more intricate. They were introducing lasers and strobes and all sorts of lights into the mix. This is the point in the night that I knew that I was in for a treat.

Around 2:15 am, AC Slater took the stage to start his assault of bass on the crowd. Continuing where the opener left off, AC Slater started off hard, heavy, and fast. Mixing flawlessly between songs, the floor thumped at a steady pace all night. He featured some of the songs of his new Back to the Floor EP, also off of Skrillex’s OWSLA label, including “Roll Up” and “Freaky”. Another highlight track that I noticed was Skream’s jack house song “Bang That” .This was my first time seeing AC Slater live and he blew me away. His track selection and mixing were astounding, and the lights were stunning. I unfortunately could not ID many of the tracks that he played because I did not recognize and my Shazam app could not pick them up either, but that did not detract from how much I enjoyed his set.

At about 3:30 the men of the night, Jack Beats, took to the stage to begin their set. Consisting of DJ Plus One (of The Scratch Perverts) and Beni G (of The Mixologists), they took the reigns over from AC Slater and never let go for the whole set. Playing a lot of their own tracks, and plethora of other hits by similar types of producers. Some of the notable songs they played were two songs off their new EP, “Beatbox” and “The Ill Shit”; and other hits like “War feat. Diplo and Example”, “Just a Beat”, “Get Down (VIP)”, and “Epidemic feat. Dillon Francis”. They also played their remixes for Beyonce’s “Countdown” and Flux Pavilion’s “Daydreamer”. There was also a remix of DJ Fresh’s “Dibby Dibby Sound” that I had never heard before, but it made me move. The only downside was toward the end of the set, they played about 10 minutes of trap that bored me a bit, but they got right back into a house tempo after that. Their set ended around 5:15 to rounds of cheers and applause. Everyone in the building was satisfied with the dose of heavy bass they had just gotten.

Overall, the show was unbelievable. The music was fantastic. The visuals were above and beyond what I expected. And I had a spectacular time. The crowd was the perfect mixture of filled, but with enough room to move comfortably and be able to dance without bumping into every person around you. The whole night was handled very well by the staff. The next time I see another performer at Club Therapy I want to see, I will definitely be attending and I will recommend it to anyone else interested in a great afterhour’s club in Providence.

LISTEN TO THE BEATBOX EP

WATCH THE VIDEO FOR BEATBOX 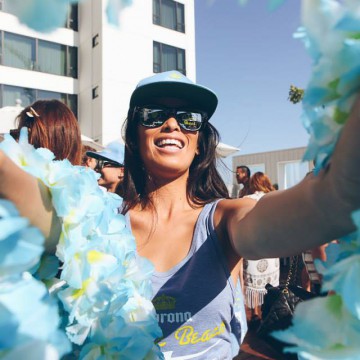