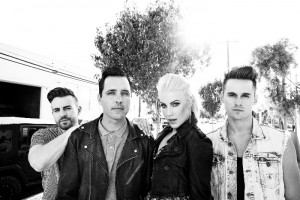 The Nashville four-piece released their Mark Needham (The Killers, Imagine Dragons)-produced debut album Savages earlier this summer via Red Bull Records. It contains 13 tracks of bombastic, heart-skipping raw electronic bursts wrapped in pop hooks, all delivered with the power and energy of a live band.

New single “Savages” is a Top 5 Billboard Club hit, with early support from DJs like Martin Garrix, Sander Van Doorn, W&W and Swanky Tunes. It impacts at Top 40 radio later this summer. Five Knives have scored two other Top 10 Billboard Club hits, with “Sugar” and “The Rising,” their songs have been remixed by Pretty Lights, Chris Lake, Dave Aude and others and “The Rising,” from their 2012 EP of the same name, was nominated for a Grammy in the category of Best Remixed Recording (remixer Eddie Amador).

Another new track, “Rattatat,” is featured in the trailer for American Ultra starring Jesse Eisenberg and Kristen Stewart. The film hits theatres August 21st, watch the trailer here and listen to the full song here.

Comprised of singer Anna M’Queen, keyboardists/programmers Nathan Barlowe and Zach Hall and drummer Shane Wise, Five Knives formed in 2012 and have quickly advanced from secret password basement shows in their hometown to performing at Winter Music Conference, Hangout Festival, Firefly Festival and Summerfest and sharing the stage with Twenty One Pilots, Icona Pop and Elliphant