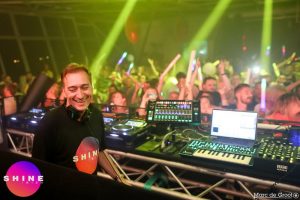 A whole lot happened on Ibiza in 1999. MTV staged festivals, Dalt Villa became a UNESCO World Heritage Site, KU had morphed into Privilege and – by summer’s end – trance had done the moonshot. To this most fitting of backdrops, Paul van Dyk arrived, headphones literally in hand, to make his professional debut. It was the first year of the Amnesia residency, the location of his second Radio 1 Essential Mix and somewhere that was to become a home away from home.

Fast-forwarding a decade or deux and no calculators necessary, 2019 sees PvD marking his twentieth successive year performing on the island. Ahead of next month’s sophomore opening of SHINE, Paul took time to reflect on his first hours, days and weeks on La Isla Blanca and how those experiences shaped his new residency.

“Twenty years is twenty years, but there is surprise in how clearly I remember my first year in Ibiza. For me – as for many I guess, that was probably down to it being a genuine moment in time.

To this day the closer to the end of a night I play, the more I enjoy it. By chance circumstance for my first 10 to 12 years in Ibiza I was always the guy closing the main room. This was before they changed the law and everything had to shut between 6 and 7am. Before that I was finishing at 9, sometimes 10 in the morning, which was incredible. It was so open ended. You made your own story. You finished really only when the clubbers had finished with you. That was something that naturally you wanted to prolong for as long as possible! This of course is not something any club on Ibiza can bring back, but as an ethos and mindset, it is. Around 2009 my set times moved to something between 2.30 and 4.30, which changed the dynamic of the night. I guess through circumstance rather than design that became my new slot and playing what was by then considered to be ‘primetime’ had its own benefits.

Another thing that was really thrilling was that – over the course of a summer – you could really break a record. You had the core-of-the-scene’s audience in front of you and their ears were dialed into everything. It wasn’t the current anthem that excited them, but ‘what-might-one-day-become’. I remember the Wednesday before one of the very first Amnesia shows I’d played at BCM, Mallorca. The resident there – lovely guy called Des Mitchell, played a white label, which just had the place erupting. And BCM was immense – 4000 plus every night. Track-wise, it took a lot to stand out there. When it finished, he handed it to me. It had ‘Welcome To The Dance’ scrawled on it and had this extraordinarily positive summer/sun/Ibiza sort of vibe to it. Plus the title to go with it! I played that every Thursday throughout the season. By the end of ‘99 it had gone top 5 in many of the major European countries. That may even have been the first trance track that was really broke big at Amnesia. I think a lot of people who go clubbing in Ibiza these days want to go to a club and hear what they hear on daytime radio today, as opposed to what they’re going to hear in 3 – 6 months time. SHINE Ibiza is a wholehearted attempt to get back to the fundamentals of what mattered. I don’t mean the 10am closures or building breakout hits, but reclaiming the essence of those early years.

Back then overall there was definitely more artistry to it all too and that’s what we’re channeling here too. Big is brilliant, but only if it’s hand-in-hand with quality and some discovery. If it’s not, then, for me there’s a question mark there, and that’s what we’re looking to address on the island. One thing we said during the early SHINE meetings last year was ‘we’re not booking DJs or personalities, we’re booking artists’. Positive forces – forces within the scene that add, not subtract. They have an idea, they have an agenda they have a drive that goes far deeper than just putting on a show for 90 minutes. If this is the anti ‘clubbing tourist’ night, the anti ‘corporate clubbing/bottle-service’-aimed night then this makes me really happy. It’s exactly what’s so thrilling about SHINE. It’s focuses on people who love the music, the ones who come to move; the ones who are more interested in the journey than anything else. And this year – even above 2018 at VISTA is something we’re going to be able to give them at our new dedicated home at Eden”.

SHINE Ibiza begins its eleven-show run (details below) on July 11th with a 3 hour opening set from Aly & Fila and 3 hours closing one from Paul. Tickets are on sale now via www.shine-ibiza.com/tickets and SHINE’s new season preview trailer has just gone online on YouTube.