Six-time Grammy-winnerSkrillex announces his Mothership Tour 2014 that will have him headlining some of the biggest stages of his career this summer. Sonny Moore and his friends will be playing in everything from massive festivals to theaters, including many open air venues to let the bass hit unconfined. Joining Skrillex on tour will be DJ/Producer/Taco Bell enthusiast Dillon Francis,Grammy-nominated producer DJ Snake, What So Not and LA duo Milo & Otis.

Red Bull has also teamed up with Sonny to help realize his vision for tour production and help kick-off the next chapter of the Skrillex story. “Nobody touches Red Bull right now when it comes to thinking up groundbreaking projects and ideas and actually making them happen,” Sonny adds. “My crew and their crew have a lot in common, as people in terms of thinking big and going big so they were an obvious choice as a partner for my 2014 tour.” Go behind the scenes to see how Sonny and his friends are preparing for the tour here:http://win.gs/skrillextour2014

The tour will kick off in Oklahoma City on May 23rd at the historic Zoo Amphitheater before continuing through the Midwest and Northeast. Skrillex will also headline two shows at Denver’s famed Red Rocks Amphitheatre on June 20th and 21st which will bring an expanded, special line-up to be revealed soon. There will also be performances at some of the biggest music festivals in the world with appearances at Coachella, Governors Ball and Bonnaroo (including a Skrill-curated “Superjam”) along with intimate sets at SXSW in Austin, Texas and Winter Music Conference in Miami. American Express® Card Members can purchase tickets before the general public beginning Monday, March 10 at 10 amlocal time through March 13 at 10pm local time.

* with Dillon Francis, What So Not, Milo & Otis

Event Review: Skrillex and Friends at Pier of Fear 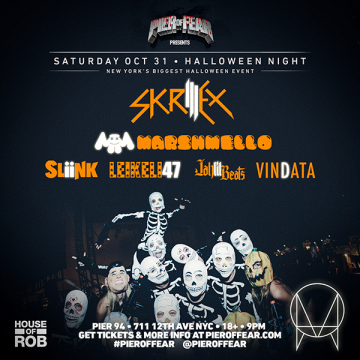