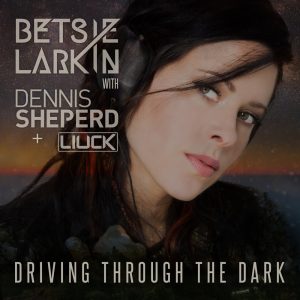 Since her ‘Invincible’ and ‘Unite’ deuce hit stores & floors last year, Betsie Larkin’s been firmly back in song-writing swing. Those releases teamed her with Mark Sixma and Roman Messer and her first for 2018 sees the US singer stay within the European production quarter.

This time out it’s Germany’s Dennis Sheperd & Italian Luca ‘Liuck’ Facchini who’ve been tasked with studio duties. Collectively the trio have combined forces for a single that’s every ounce as emotionally relatable as it is floor conquering.

A carefree wanderluster of a song, through with its lyrics ‘Driving Through The Dark’ casts off the chains, as Betsie’s vocal swells with hope and wish-fulfilling promise.

Dennis and Liuck empower its production with drumatic beats, duskier synth movements, a provocative electro lining undertone and atmosphere-fusing FX. Over the production horizon comes the strum & thrum of ‘Driving’s bass guitar, which resolves into the track’s stadium-sized mainline hook.

One for the dreamers out there, go ‘Driving Through The Dark’ with Betsie, Dennis & Liuck this very night: https://magikmuzik.choons.at/drivingthroughthedark

01: Betsie Larkin With Dennis Sheperd + Liuck – ‘Driving Through The Dark’

Fabio XB & Liuck Feat. Christina Novelli – ‘Back To You’