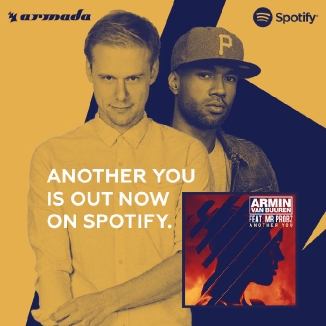 Armin van Buuren, one of the world’s biggest DJs and a GRAMMY® nominated electronic dance music (EDM) producer, releases his latest single, “Another You” (Armada Music) featuring Mr. Probz, on May 8th, 2015. “Another You” is the first single from Armin’s forthcoming full-length studio album to be released this fall. The Mark Sixma Remix premiered on March 28th during Armin’s set on the mainstage of Ultra Music Festival in Miami.

With 17 years of expertise as a ground-breaking DJ, producer and composer of electronic music, Armin is not only at the top of the music industry but also at the top of his game. With the explosive growth of the youth-driven EDM culture worldwide, Armin has become known well outside clubland with recent hits like his GRAMMY® nominated single, “This Is What It Feels Like” featuring Trevor Guthrie from Armin’s last studio album, Intense (Armada Music). That song earned Armin the GRAMMY® nomination for “Best Dance/Electronic Recording” last year and was a bona-fide hit inescapable on radio and television worldwide. “This Is What It Feels Like” was certified gold in the U.S. and achieved platinum, gold and silver sales certification in numerous territories around the world, including seven-times platinum in Armin’s home country. For Mr. Probz, “Another You” follows the success of his recent hit single, “Waves.” “Waves” peaked at the “#1” chart position in the UK, Germany, Austria, Norway, Sweden and Switzerland.

Armin’s own award-winning, two-hour radio show, “A State of Trance” (ASOT), boasts more than 25 million listeners from around the globe each week. The demands of programming this show have helped Armin hone his already mighty skills in recognizing what makes top-notch dance music. Add to that Armin’s grueling, non-stop tour schedule – he performs more than 150 live shows per year at venues around the world – and it’s clear to all that music is the number one passion of Armin’s life.

Armin first met multi-platinum Dutch singer/songwriter, rapper and producer, Mr. Probz, last year at the Buma Awards in the Netherlands where Armin received an award for most-played song on Dutch radio. At the time, Mr. Probz’s “Waves” had just been released and was already exploding in popularity worldwide. The two remained friendly and by the summer of 2014, Mr. Probz found himself in Armin’s recording studio. There he played Armin a short, rough version of what would later become “Another You,” co-written by Niels Geusebroek. Armin and his production partner, Benno De Goeij, began working the clip into a song. Additional vocals were recorded with a live orchestra and the song was completed in February 2015.

Said Armin, “It’s really great when I’m able to vibe with ‎another artist like I did with Mr. Probz on ‘Another You.’ We’re so different musically and I think we each bring unique strengths into the studio and as performers, and that’s what makes ‘Another You’ so special. Hope people like it!”

The Radio Edit of “Another You” instantly grabs the listener with the first strummed chords until Mr. Probz’s irresistible vocal enters with its uniquely gravelly timbre. Armin worked the song’s hooks and impeccably timed builds and drops to leave the listener no choice other than to throw both hands firmly in the air. The Mark Sixma Remix of “Another You” takes the radio-friendliness of Mr. Probz’s vocal and twists it into a monstrous track positively begging to be reigned down upon the happy, sweaty summer festival masses. The massive, climactic crescendos on this edit set the listener alight on euphoric wings of sonic bliss. One can readily imagine a festival crowd, thousands of people all jumping in unison at the chorus. This version is the Original Radio Edit turned on its side with a dose of red habanero pepper sprinkled on top.

Watch Armin debut Mark Sixma’s Remix of “Another You” during his headlining set on the mainstage of Ultra Music Festival 2015 in Miami on March 28th: https://youtu.be/VfoC8YoQLxo

“Another You” will be released on May 8th. The single is now available for pre-order on iTunes: http://bit.ly/AnotherYou_iT

Be sure to follow Armada Music for the exclusive premier of Armin’s Original Mix, coming soon.