Long regarded as Russia’s foremost electronic music duo, put simply Moonbeam create music unlike anyone else on the planet. Following 2009’s ‘Around The World’, ‘The Secret’ (2011) and the Original Soundtrack to their 2013 feature-length movie ‘The Random’, Moonbeam’s fourth international album ‘Atom’ follows in the Khvaleev brothers’ grand tradition of the untraditional.

So prepare to take another trip to electronic music’s otherside, as Black Hole Recordings once again proudly present the extraordinary long-playing ethereal-ism of Moonbeam.

Mood house? Dream-prog? Dark-trance? Or just straight deep, dark, moody & dreamy everything – there’s no one more averse to classifying what they do in the studio than Moonbeam themselves.

Within ‘Atom’s opening 5 minutes, that ‘off-piste’ nature is put into the sharpest of perspectives. Engaging sounds & FX from the deep-space recesses of their studio boxes, ‘Atom’s title track begins to outline Moonbeam’s next album mission. 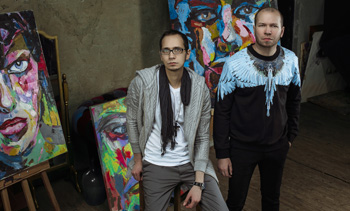 Lucid, honest introspection is Irina Makosh vocal/lyrical forte. Backed by the bass thrum of Pavel & Vitaly’s guitar strings, the Russian chanteuse first smolders, then burns on ‘Still Believe’. Having voxed Moonbeam’s ‘You Win Me’ & ‘Hero Of Hope’ (as well as music from a litany of other international artists), ‘Shades Of Black’ sees the stunning vocal return of Ukrainian songstress Aelyn.

With 10 or more Moonbeam credits to her name, Avis Vox is undoubtedly now Pavel & Vitaly’s foremost vocal medium-cum-muse. She brings her lyrical incision to ‘13th World’, as the Khvaleevs echo their nature with aquatically inspired, aquiline shaped sounds and timbered percussion.

Russian singer Ange (previously featured on releases from Get Physical, Tiger, Baroque and others) delivers her softly sung, yet soulfully bared turn to the deeply bewitching ‘Atmospheric’. Recent single ‘Follow Me’ meanwhile is a co-write with the Ukrainian-based DJ, producer, TV & film soundtrack composer, Indifferent Guy. He brings yet more filmic touch and cinematic nuance to Moonbeam’s music, while Eva Pavlova affords the track its near-poetic paean and intoxicating (and in no small way) beguilingly vocals.

Initially deep house in the engine room and supremely chilled trance up top, xylophone meets chip-tone on ‘Soulstring’, as they factor another star gaze instrumental into ‘Atom’s astronomy. Reinforced by Moonbeam’s brilliantly trippy beats and mind-bend synthesizers, under her Loolacoma alias Avis Vox returns to the mic to open the album’s third act with the seductively sung ‘Black Skies’.

Seattle-based vocalist Sopheary picks her words & intonations with manifest care on ‘Heaven’, as Moonbeam closely track its feel with swimming melodics and punchy drum programming. Every bit as authentic and cultured, Deniz Reno delivers the album’s swansong with the torchlight closeout of ‘Memories’.

With ‘Atom’ your taxi to the darker, more thought provoking side of electronic music awaits!
Step aboard this May 18th.

ReOrder – All Comes Back To You