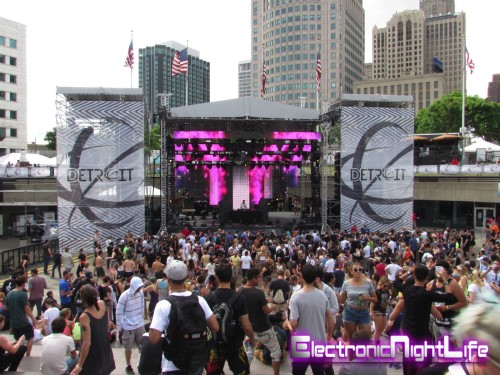 When I told my friends and family that I would be spending my Memorial Day Weekend in Detroit, I got a lot of laughs and weird looks. Is Detroit known for its lovely spring weather? Not necessarily. My midwest paradise would be rooted in art, culture, and most importantly, music, seeking an alternative route than your typical boozy holiday weekend. I ended up in Motor City in search of techno, and what I found was so much more than that.

DEMF/Movement has taken over Hart Plaza for the past 15 years, bringing together a community of music lovers from Detroit and beyond. 2015 was no different, with stages curated by Beatport, Red Bull Music Academy, and techno patriarchs themselves at Made in Detroit. New to Movement this year was the Sixth Stage, dedicated to up-and-coming local talent, including the drum and bass sounds of Koncrete Jungle Detroit’s label showcase.

Upon arriving at the gates on Saturday, I was thankful for a cloudless sky and the fact that I didn’t have to wait in the will-call line. Despite seamless pick-up and entry in years past, festival attendees had some gripes with picking up their wristbands, some even citing an up to 4-hour wait in line. Any frustration melted away, though, as fans poured through the gates of Hart Plaza to experience the first day of the festival. Getting acclimated with the surroundings, I immediately noticed the diversity within the crowd. Young and old faces peppered the scene mixed with the man buns and black ensembles I’m used to seeing in New York. Unlike some festivals, though, where you can clearly tell a festival attendee from an innocent bystander, Movement seemed to be about equal parts Motor City local and out of town tech-heads (as well as a good mix of your usual neon raver). The mix was eclectic and unpretentious, a true testament to the music bringing all walks of life together.

My personal highlights of day 1 focused more on the groovy house sounds of the weekend, with incredible sets by Catz ‘N Dogz, an electric live performance from Octave One, and the master himself, Carl Craig closing out the Made in Detroit stage with a feature from Mad Mike Banks. As you moved from stage to stage, you might have caught some of the artists enjoying themselves in the crowd, whether it be Eats Everything on the sidelines of a dance circle or Stacey Pullen on his way to grab a corn dog .

Those looking for a harder sound kept to the Underground stage, where the bass was relentless and the dance floor was packed each and every day. Cell Injection (Drum Cell and Audio Injection) and Paula Temple were two surprise acts that completely threw down at the underground stage. The underground stage removed all concept of time and space in the outdoor festival, creating a dark and brooding atmosphere for heavy techno at any hour of the day. Despite Paula Temple’s 5pm time slot, in the steamy pit of the underground stage it felt like it was 5am at german super-club Berghain.

Dance Circle at RBMA stage (can you spot Eats Everything?)

Closing out the evening on Saturday was the one and only Richie Hawtin, who brought his A-game to the main stage with a production that slowly built to create one of the best sets I’ve heard from him as of late. With the stage dark, and the dj booth solely surrounded by a white spotlights straight into the sky, reflecting the dark, shadowy sounds of Rob Hes feat. Noraj Cue’s “Trapeze” and amping up the entire crowd for the rest of the set. As he moved into the Junkies “Got to Do it” the whole stage lit up, momentarily blinding the crowd and sending everyone into a frenzy as the beat dropped. Between the stage production and the set, it was a memorable moment to see the crowd completely lose themselves to the music all at once. His set built to include favorites like Maceo Plex’s “Conjure Dreams”, and a new unreleased Plastikman track “Purrkusiv”. Hawtin did not disappoint and left the crowd on a massive high to close out night one as the crowd disbursed to one of the many afterparties around the Detroit metro. Afterparty highlights included Innervisions at The Works and Carl Craig and Friends at the newly opened Populux nightclub. After a stellar first day, I had to keep reminding myself that this was only the beginning…

As the saying “no sleep for the wicked” goes, many techno witches and warlocks rolled into day two of the festival with almost no sleep or sustenance yet still revved up and ready to dance. The motto for the weekend thanks to Movement vendor Division Street Boutique was definitely “Detroit Hustles Harder” as I’ve never seen a festival weekend filled with more non-stop parties at any hour of the day. Hometown favorite Gabi got the main stage going to open the festival, with lots of Motor City locals coming out early to support. Her smooth, minimal set was perfect for the cloudy afternoon, easing us all into the rest of the day.  The main stage was stacked for the rest of the day, featuring sets from Bob Moses, Oliver Dollar, Josh Wink, Art Department, Loco Dice, and Dog Blood.

Those looking for a change of pace headed over to the RBMA stage, which hosted an eclectic line up including Hudson Mohawke and Detroit rapper Danny Brown. With Sunday seeming like the busiest day of the festival, many came solely for these unique acts. Every single stage had an ideal line-up on Sunday, making it difficult to choose one place to hang out at. One of my must-see acts for the day was Josh Wink, who’s signature sound could be heard echoing from the main stage as the sun began to set. The infectious “Don’t Laugh” got the crowd on their feet, as did Wink’s popular track “Talking to you”. It was a nice pick-me-up before Ten Walls took to the decks, playing a live set. From this point on, I spent a good portion of my evening at the Beatport stage, taking in sets from Maya Jane Coles and Hot Since 82. I was pleasantly surprised to really enjoy Maya’s set, with her pulling from a more groovy side of the tech-house spectrum to deliver a perfect daytime soundtrack for the stage. As the sun set on another day, the vibes slowly but surely got deeper and darker, and the crowds moved back towards the central part of the plaza.

With some having high hopes for the super-group Dog Blood (Skrillex and Boys Noize) the duo seemed to fall quick to some of the music trends as of late, peppering in trap beats with the acidy sound of their original tracks. I had high hopes for their set after hearing their 7am Monegros set (which you can listen to here) but hard hitting tracks like Boyz Noize and Pilo’s ‘Cerebral’ seemed out of place mashed with Rae Sremmund’s “No Flex Zone”.

The stage to be at for Sunday’s final hours was the underground stage, with a stacked lineup of hard German techno. Steffi, Rødhåd, Marcel Dettman kept vibes dark and fast, pulling out sets with banging basslines that kept the crowd moving. This stage was continuously packed with people, not to mention hot and sweaty – pair this with relentless bass and it definitely was not for the faint of heart. The stage culminated with Ben Klock showing both his versatility and vigor with an absolutely mind-blowing set to close out the night. With the underground pit packed to the brim for the last hour of the festival, Klock took no mercy on the crowd. Many echoed sentiments that he not only had one of the most anticipated sets of the festival, but followed through to deliver one of the top 5 sets overall. 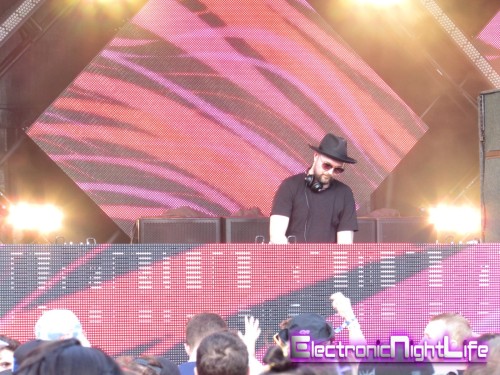 While some opted to sleep in for the final day of Movement, veterans could be found at Old Miami, up bright and early for the legendary “Need I Say More X” day party hosted by Seth Troxler and friends. Heralded as one of the best parties of the weekend, fans arrived as early as 6:30am to get in the doors right at 7. The line-up included some of the founding fathers of Detroit techno, including Stacey Pullen, Carl Craig, Mike Servito, and Carl Souffront among others. By 9:30am, the line was almost 3 hours long to see the coveted lineup. Those unwilling (or too tired) to brave the lines arrived to the final day of Movement early to check out acts like Annie Hall, Patrick Topping, and Audiofly. The Made in Detroit stage played host to legends such as the Saunderson Brothers, MK, and Lee Foss, who kept the crowd bumping as they entered the festival. At the underground stage, sets from Nina Kraviz and Matador were highlights of the evening, while festival funkmasters posted up at the main stage for the always saxy Griz, who mixed up the mainstage with his super-groovy sound.

Despite trying to stay in touch with Detroit’s music roots with the booking of Snoop Dog (as DJ Snoopadelic), his set seemed more than out of place in the sea of thumping beats than the seldom neon outfit that was seen in a sea of black v-necks. Those brave enough to sit through his set caught what could have been a shuffled playlist of “Stand by Me” with “I’m in Love with the Coco”, peppered with other reggae and R&B tracks. Those that might have been dissatisfied with their main stage choice to end the festival hopped over to the Made in Detroit festival for an epic B2B set with Kevin Saunderson and Derrick May complete with live bongos for their “Hi-Tech Soul” set. The set was filled with, funky, groovy tracks that made any passer-by smile. The duo paid an homage to the roots of Detroit soul, and the beginnings of house and techno, bringing the festival full-circle. Hart Plaza went dark around midnight, but the heartbeat of the city continued into the night.

In a time where Memorial Day Weekend festivals are a dime a dozen, Movement festival stands out above the rest curating a no-frills, music-focused festival in Detroit, the heartland of techno. What the festival lacks in fantasy and whimsy is made up for with an unsurmountable list of talent from around the world. The sense of community, the diversity, and the love from all of the attendees is completely indescribable – . Detroit, Movement, Paxahau – I think I’m in love with you. I’ll see you next year.

For those like me who are having immediate withdrawals and counting down the days until next year, Paxahau left a cheeky clue within the hard-copy programs you received at the festival… a note to “follow the sun”, with Movement’s logo juxtaposed with a palm tree. Will the techno gods grace us with a satellite festival in paradise this year? All signs point to yes!